Stumbling upon the work of Nicolas Chardon without seeking to put it in a box or find references to it in the history of painting, experiencing a moment in which a certain magic operates: we contemplate, question ourselves, look more closely and very soon a smile plays on our lips, as we manage to discern what presents itself to us. There is no doubt that the person behind this work professes a true love of painting and demonstrates a subtle irony, the lightness of which is almost lilting and beyond the cliché of the artist expressing onto the canvas his innermost feelings. We simultaneously perceive the seriousness of the work in an almost intuitive way and a deep analysis of the conditions of painting, techniques and materials, their possibilities of bearing meaning but also their source of stimulation, without managing or wanting to express this directly with words.

A first visit to an exhibition by Nicolas Chardon requires a few explanations: the right angle dominates and the basic square shape is almost omnipresent. And yet the opposite is just as valid: you will find no angle measuring exactly 90 degrees; with naturally twisted shapes, appearing almost in an ad hoc manner on the canvases. Here we are promptly mid-ontological thought, so to speak; we start thinking about visual codes and the principles of placement, conventions and cultural connections with respect to the interpretation of reality. Although distinguishing a bona fide geometric square comprising four equal sides and four right angles on Nicolas Chardon’s paintings is purely a matter of chance, we always describe the shapes as regular and recurrent orthogonal constructions that have been deformed and twisted in one way or another, and not freehand, almost elusive surfaces, from a mathematical point of view.

The fact that the models that dictate a certain vision of the world to us are essentially based on regularity, shared laws and conventions also means that an anarchic or at least humorous potential inhabits these seemingly deliberate transgressions. Apparently, there is someone who does not take this world that we have created that seriously, instead orienting us in daily life and helping us to avoid feeling overcome by possibilities, playing on rules and conventions, circumventing structures and expectations. It is important to understand that the artist, just like the viewers, finds a certain freedom in this: in the foreground, the theoretical discourse, which the neophytic audience can easily feel themselves excluded from, makes way for direct experience, the comparison of artistic creation with a clearly deviant vision of it.

Nicolas Chardon manages to create this productive irritation by shifting what we’re used to seeing. Even when he chooses the material of his medium, he propels painting into the world of everyday life: he replaces the traditional painting canvas by ordinary fabrics whose bold checkerboard motifs are the result of the expertise of various crafts, like Vichy, Scottish, or madras fabrics used to make everything from tea towels to clothes. Once mounted onto a frame, they already form a kind of predefined artwork consisting of lines, colours, and layout. This composition is nevertheless strongly disrupted by a highly regular woven pattern that is totally distended and deformed in an unrestrained way by the tension exerted during its attachment over the frame. The rigorous grid of the pattern transforms itself into an agitated ocean of forms that have lost all notion of limits, or in more mathematical terms, a simple intervention transforms an Euclidian space into dimension 1 varieties from the theory of relativity.

After applying a first transparent layer onto the taut fabrics, which always allows the pattern to emerge, Nicolas Chardon imposed his own order on this system that he invented and manipulated: he mostly uses black acrylic paint, but also red or other colours from time to time, to paint along predefined lineatures, bringing forms together and creating larger “squares” and “rectangles” (which really no longer strictly resemble these shapes), composing meanders, mazes and lettering, all deriving from the grid. Whereas the original pattern remains visible on the blocks and confers something tangible to the painting, the white colour, which surrounds it and traditionally represents the background, comes in at the end, like some sort of frame surrounding the elements. We still think it’s possible to describe them geometrically and yet we are immediately called to order – this would equate to radically simplifying their existence. We really start to rack our brains from the moment we become aware of the imprecise nature of our own interpretation, including that of the combinations of painted letters and some of the words they give rise to. Are these paintings abstract (which they sometimes proclaim to be), tangible or even figurative, are they ironic, discursive or intuitive, are they solitary, series or installations – do they represent a new order, the gateway to chaos or all of the above?

The opportune time has come for evoking the Black Square shown by Kazimir Malevich in 1915, representing both the first and final points in painting, so as to free the painting from a representative stranglehold and re-establish the capacity for thought in art, as the essential principle of human knowledge. We can also refer to Marcel Duchamp and the ready-made, thanks to which objects from everyday life were, for the first time, considered worthy of art. It is also important to insist on the fact that Nicolas Chardon already quoted at the start of his career – with remarkable consequences – the legendary exhibition 0.10 in Saint Petersburg with a subtle irony and disarming love of painting, from that moment on and up until the present day, he drags away the incunable of the “black square”, through all modulations imaginable, from the abandonment in the streets of Rome to the structures built with refinement. Some focus on these references taken from art history right from their first encounter with the artist’s works, but their gaze later becomes somewhat diverted. Ultimately, we are always brought back to our own perception, to the joy of discovering and deciphering, to the physical experience of the untouchable. What could be more beautiful for an exhibition? As Nicolas Chardon so aptly puts it: “By demystifying the origin … and the end… , the artwork gains access to a true material presence, I’d even say a concrete one.” 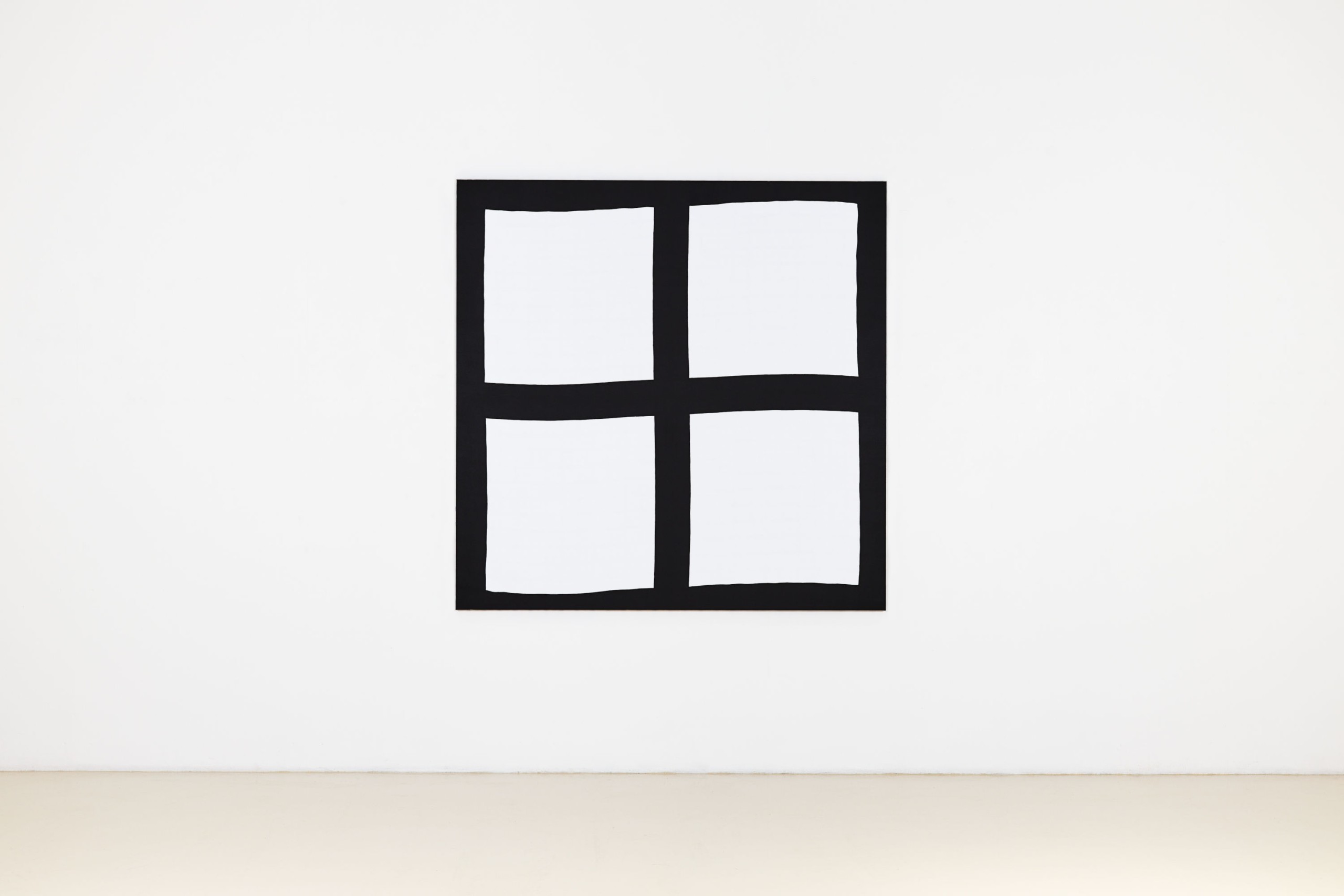 Nicolas Chardon graduated from ENSBA Paris in 1997.
He was a resident at the Villa Medici, French Academy in Rome in 2008 - 2009.
He is co-founder of the alternative school BABA and of the publishing house CONNOISSEURS.
He teaches painting at the HEAD in Geneva.
He is represented by Galerie Laurent Godin (Paris), Galerie van Gelder (Amsterdam) and Gallery Shilla (Daegu - Seoul).

Since the end of the 90’s his work is regularly shown in solo and group exhibitions in France and abroad. He is present in important private and public collections, such as the Centre Pompidou - Musée National d’Art Moderne in Paris, the MUDAM - Musée d’Art Moderne Grand-Duc Jean in Luxembourg, the Musée d’Art Moderne et Contemporain in Strasbourg, the Musée d’Arts de Nantes, the Musée Voorlinden in Wassenaar (NL), the Meritz Foundation in Seoul, the Marta Collection in Herford and EPO in Munich.
He has participated in numerous exhibitions including La Force de l’Art at the Grand Palais in Paris, Peinture / Malerei at the Martin Gropius Bau in Berlin, Seconde main at the Musée d’Art Moderne de la Ville de Paris, Tableaux at the Magasin in Grenoble, Dystotal at the Ludwig Forum in Aachen, Revolution in Red-Yellow-Blue at the Marta Herford, Museum for Art Architecture Design in Herford.
In 2012 the Museum of Modern and Contemporary Art in Strasbourg offered him his first museum monograph. In 2018 he had his first institutional exhibition in Germany at the Kunsthalle in Bremerhaven.
In 2022 and 2023, in duo with Karina Bisch, he will carry out two major projects, at the MAC VAL in Vitry-sur-Seine and at the Kunstmuseum in Bochum.

Roland Nachtigäller studied art, visual communication, German Language & literature, and media education in Kassel, Germany. After completing a research assistantship at Kunsthalle Museum Fridericianum in Kassel, he joined the management team of DOCUMENTA IX in 1991. He subsequently pursued numerous exhibition projects as a freelance author and curator, such as the kunstwegen sculpture project in 1998, Feldversuche in 2002 or raumsichten in 2012. Before being appointed Artistic Director of the Marta Herford Museum, Nachtigäller was Director of Städtische Galerie Nordhorn between 2003 and 2008. The accolades that Marta Herford has won under his directorship include being voted Museum of the Year 2014 by the AICA International Association of Art Critics. After 13 years of successfully developing this iconic museum (built by Frank Gehry), he moved to the Rhineland at the beginning of 2022 to assume responsibility for the Insel Hombroich Foundation and Museum. He is the author of numerous catalogue, book and blog articles on contemporary art.