Roberte Mapplethorpe, Claude Cahun, Eugenie Delacroix, Louis Bourgeois, Joséphine Beuys, Miss van der Rohe, Martine Kippenberger, Francine Picabia, Annie Warhol, La Corbusier, Marcelle Duchamp, Jacqueline Pollock, Francine Bacon, Jeanne Nouvel, Danielle Buren, Romane Opalka, Jacqueline Lacan – and all the other big names in our cultural history. But wait, with Agnès Thurnauer, the first names of these luminaries have changed genders. We are already stumbling, so how do we bring a Jacqueline Lacan or a Louis Bourgeois together with the works with which we are well acquainted?

Agnès Thurnauer knows a lot. She is well-read, knows art history inside out and quotes the works of the great masters in her own paintings. As a true Frenchwoman and Parisian, she is extremely familiar with the most important philosophical theories of the 20th century. She has an excellent education, which began in the family home and did not end with the practical knowledge and skills of the Ecole nationale supérieure des Arts Décoratifs. Agnès Thurnauer is therefore informed, she is in the know and, what’s more, she can paint really well. Her art relates to the frames of reference of our cultural sphere; in this respect, lands and language and slogans are only three aspects that she scatters and intermingles throughout her pictures and objects.

In this series on which the artist has worked in parallel for decades, Agnès Thurnauer examines the binary system of the sexes, the borders between countries, continents and languages and confronts masterpieces from art history in the exhibition space with her practical, almost garrulous seat sculptures. These aluminium sculptures reminiscent of split marrow bones are objet d’art, resting bench and message in one. They stand around brushed in the museum or in the outdoor space and offer an invitation to linger. They look a little bit like blocks from an oversized, three-dimensional game of Tetris, and that is not too far out an idea, as the elements have been pushed to fit together, resulting in individual letters that in turn make a word. Of course, the sculptures are too heavy to be arranged by us the public, but they seem as if they are inviting us to interact and soon we are in the middle of them, deciphering the letters and discovering a message that the artist is addressing to us. Perhaps “JOIE” or “CHROMATIQUE” or “ICI”. Any questions?

All this could come across as extremely erudite and perfect, the high-gloss play on names or the paintings overlaid with words. Clever and boring at the same time, if Agnès Thurnauer did not have a sense of humour as well as her unquestionable talent. This sense of humour means that the artist puts the word “border” so precisely on two canvases that the border in the diptych becomes tangible. Or she humorously places the word “wandering” over a two-part painting of – indeed, of what exactly? dunes, waves, camouflage? – so that “wandering” becomes obvious in the picture. Signifié and Signifiant overlap in these powerful paintings; we can no longer distinguish between signifier and signified. In one of her earliest works – in fact that’s not true, she began it in 2001 and completed it in 2021 – in any case, in this watercolour we can see two rooms: on the left, the floor and walls are painted and inscribed with a large “QUESTION”; in the middle, an arched passageway is visible; on the right, there is a second room with its walls and floor also painted and inscribed, in between is a large “RÉPONSE”. Ferdinande de Saussure! It’s the answer! 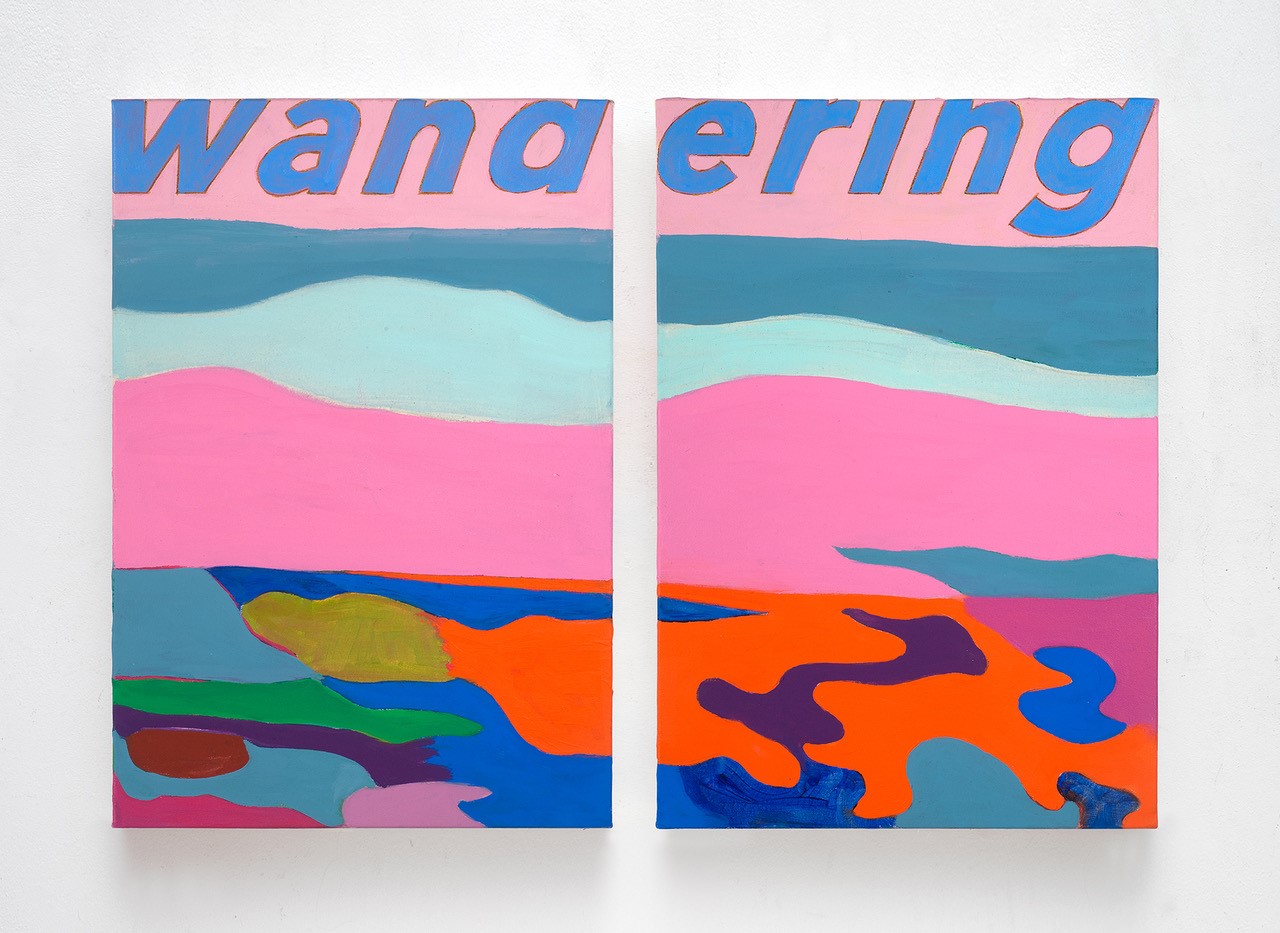 Agnès Thurnauer is a franco-swiss artist. She is born in 1962 in Paris. She lives and works in Ivry-sur-Seine.

Through her paintings, sculptures, and installations, Agnès Thurnauer deals with the issue of language. In her pictorial praxis, writing is often incorporated in the picture and even when it is not, the allusive power released by the subject places the spectator within art history as in the endlessly renewed emancipation of its own reading. This plastic quality of language is tested in three dimensions with her sculptures made of casts of letters on differing scales permitting the involvement of the gaze and the body. For Agnès Thurnauer, the relation to the work always introduces a form of reciprocity. If the work reads the world, it is up to each one of us to make our own reading thereof. This shared language lies at the heart of society and gives art a powerful poetic and political function.

Agnès Thurnauer’s work was revealed to the public by a solo show at the Palais de Tokyo in 2003. Since then, she has exhibited at the Centre Pompidou, the Angers Museum of Fine Arts and Nantes, at the Unterlinden Museum in Colmar, and at the Château de Montsoreau - Collection Philippe Méaille, among many other venues. She has also shown her work in Belgium at the SMAK in Ghent, in the United States at the Seattle Art Museum and the Edgewood Gallery at Yale, in Brazil at the CCBB in Rio, and in many biennials and art centres: the Lyon Biennale, the Cambridge Biennial, the Kunsthalle Bratislava, and the Yermilov center Kharkiev…

Fanni Fetzer has served as the director of the Kunstmuseum Luzern since 2011. She has collaborated – among others – with Laure Prouvost, Taryn Simon, Thomas Schuette, Candida Hoefer, Rosemarie Trockel and Sharon Lockhart. She is currently working on the first retrospective of the Swiss-Argentinean artist Vivian Suter, which opens in November 2021 and will be accompanied by a first comprehensive monograph of the artist. She has won numerous accolades for her work as a curator and was recently chosen as one of the Top 100 Women of Business 2020 in Switzerland. She regularly participates in international competitions both as a jury member and as an expert. She publishes internationally on contemporary art.