What decolonial approaches can be used to rethink our historical inheritance? How can we create a new archive for the stories of those whose cultures became museum objects? How can we challenge the Eurocentric idea of a single modernity to embrace a shared heritage of global modernisms?

Transformed into sources of constant capital built upon the labour of millions of captured and enslaved bodies, the French colonies are the nexus of multiple narratives and versions of modernity. These stories are not a mere chapter in the history of humanity, they are the forces that challenge the existing organization of the world along a North/South axis.

As Aimé Césaire pointed out in Discourse on Colonialism (1950), even progressive ideologies were ultimately contaminated by the discourses of racial hierarchy. A decolonial approach acknowledges the connections and circulations that, despite the present desire to impose new borders, is leading to unforeseen ideas, images and rituals.

In this moment of restitution, reparation and reinterpretation, artists are creating diverse and hybrid forms engendered by encounters between France and the international world. Their extensive research into histories of modernity allows us to unearth hidden and suppressed narratives. These artists are reimagining the world into forms that hold their own promise of alternative futures. Futures that invite us to dream, to break with cultural conformism and to imagine another world. Futures of potentialities both real and imagined, tangible and intangible, local and planetary.

“I was born in April 1967, in M’Balmayo, Cameroon. I studied at the École Nationale Supérieure des Beaux Arts in Abidjan, Côte d’Ivoire, at the École Supérieure d’Arts in Grenoble, France and at the Kunstakademie in Düsseldorf, Germany. Aware of the double dilemma of being on the one hand unable to protect Africa’s classical and contemporary artistic heritage, and yet keen to undertake an ambitious cultural project, I decided to use most of the money I have earned through my work as an artist to set up “Bandjoun Station” … a non-profit-making project of entirely personal inspiration in terms of concept, construction, production and implementation.” B.T

Toguo’s Transit works developed out of a series of performances which the artist began in 1996. These performances take place between disparate locations, underscoring globalization as a question of connection and disconnection. Transits are rites of passage, which take place in sites of passage; in airports or railway stations, on board planes and trains. Toguo’s Transit performances disturb given systems of order to reveal invisible mechanisms of control, discrimination, ageism and racism.
In Transit 2, the artist was arrested at Orly airport due to his suspicious appearance; the packets of sweets attached to his belt caused the police to immediately associate him with arms and terrorism. In Transit 6, on the Thalys Train between Cologne and Paris, Toguo wore a street cleaner’s uniform and was repeatedly asked to leave the train as all the seats around him in the crowded train eventually emptied. O.B.

« At the end of a residency at the Drawing Center in New York in September 2001, I brought in some unused postcards that I had bought in Düsseldorf.
The crowds of Soho, on Broadway and Canal Street, enticed me to make little sketches, anonymous portraits of different people. When I got back to my studio in Paris I stuck different stamps from my collection on these cards which in turn gave me the idea of travelling across the world and asking people to write something about themselves on a postcard.
In 2005 violent demonstrations broke out in the Paris suburb of Saint Denis: young French people, whose parents and grandparents were immigrants, demanded to be heard; cars and public buildings were set on fire, the contagion was swift, and several other cities flared up. I decided to visit these places and to hear what these young people had to say. […] Head above Water acknowledges the artist’s responsibility towards society by giving ordinary people the opportunity for their voices to be heard. » B.T.

In Urban Requiem (2015) Toguo presented an arrangement of ladders weighed down with wooden portrait busts. Carved into their bases are slogans such as ‘Migrant’ drawn from recent protests and national movements, allowing each sculpture to function as a stamp. Toguo first conceived of the idea in the 1990s, after noticing that his passport was filled with stamps from various customs agents around the world. These markings mimic the language of authority, border control, and the flow of human bodies and capital that is inseparable from colonial and imperial histories. Toguo says, “My formal proposals, my ethical approach, my aesthetic vocabulary converge in the long run to go to the Other, the Others, with empathy.” O.B.

Located in the 18th arrondissement, at the foot of the Montmartre hill, Château Rouge is the most African station in Paris. In 2017, Toguo created a fresco for the station titled ‘Célébrations’, depicting faces and human bodies extending into exuberant blue plants in a process of rebirth. Taking its name from an earlier work, Toguo ‘Célébration’ is one of ‘life with all its feelings: beauty stands alongside ugliness, pleasure amidst war, sexuality with violence, joy and death.‘ Having lived in the district from 1998 to 2002, Toguo sees the station as a place that represents a meeting of cultures, with the local market carrying the produce, scents and customs of its multicultural inhabitants. O.B 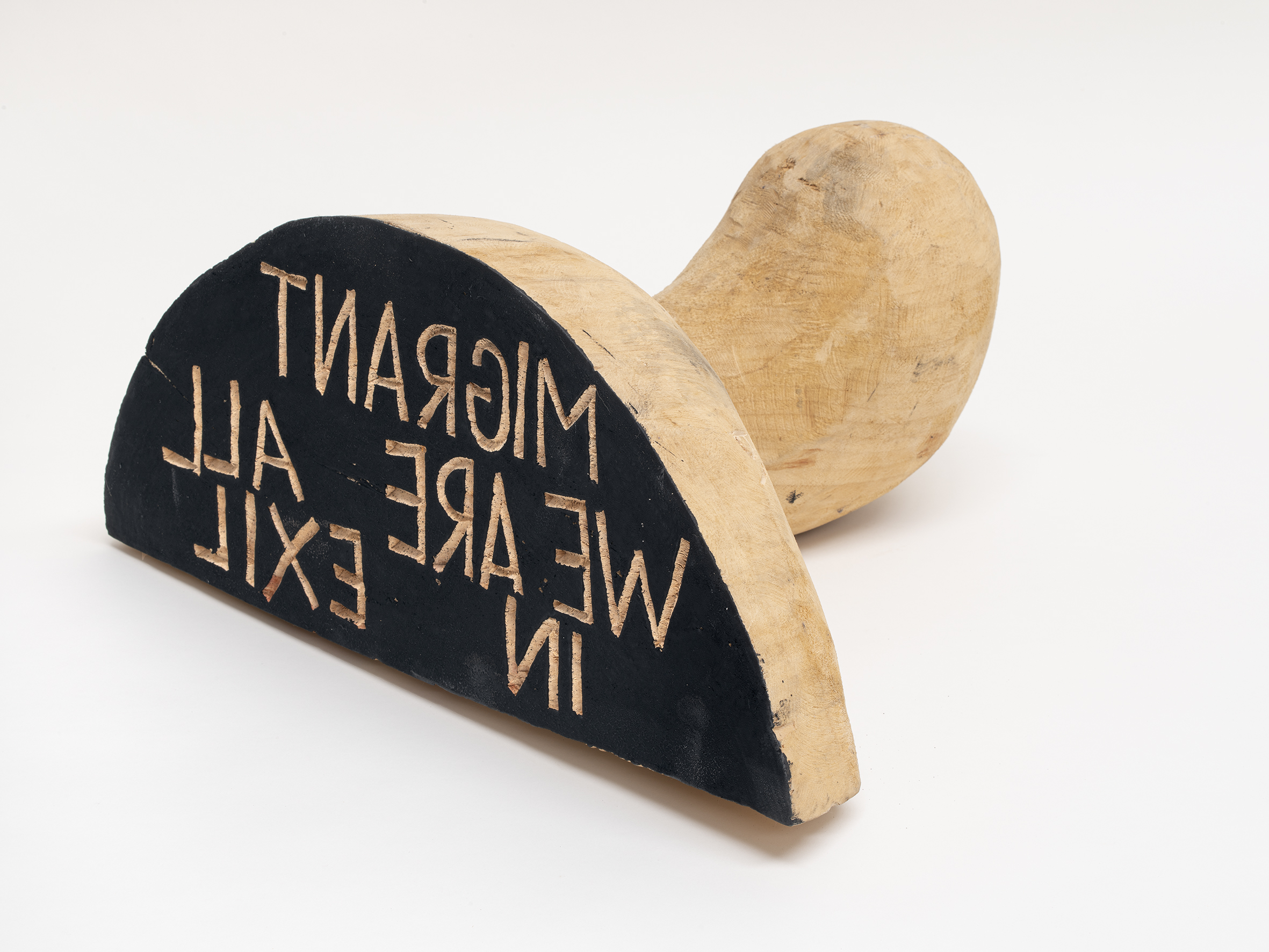 Barthélémy Toguo was born in Mbalmayo in Cameroon in 1967. Between 1989 and 1993 he studied art, first at the Ecole des Beaux-Arts in Abidjan then in Grenoble, and finally at the Kunstakademie in Düsseldorf where notable encounters included Tony Cragg, Jannis Kounellis and Konrad Klapheck. Although he stayed in Europe and became a French citizen, Barthélémy Toguo remained profoundly attached to Cameroon, and he regularly returns to the country. That is where he created Bandjoun Station, a foundation inaugurated in 2013 with the aim of hosting artists and academics from around the world in residential workshops, to develop propositions in harmony with the local population. This is how he talks about it: “My idea with Bandjoun Station was to combine classic African art and global contemporary art, to exhibit these works in the same space, without ghettoization or a hierarchy of values. […]That way Bandjoun Station will become a crossroads, a point of contact between classic and contemporary art.” This “laboratory without borders” exhibits a permanent collection of contemporary works gathered by the artist thanks to exchanges with his peers and collectors. He also develops agricultural projects there, in a spirit of healthy and sustainable development.

Since the end of the 1990s, his works have been noticed by many critics and curators who have invited him to participate in major events: Hans Ulrich Obrist in 1999 for Migrateurs (ARC, Paris), Jean-Hubert Martin in 2000 for Partage d’éxotismes (Biennale de Lyon), Pierre Restany in 2001 for Political Ecology (White Box, New York), and Okwui Enwezor in 2015 for the Venice Biennal, All the World’s Future. In 2016, Barthélémy Toguo was one of four artists nominated for the Prix Marcel Duchamp and for this occasion he presented the installation Vaincre le virus! at the Centre Pompidou.

The works of Barthélémy Toguo are exhibited in many collections including those of the Musée National d’Art Moderne (Paris), the Bibliothèque Nationale de France (Paris), the Museum of Modern Art (New-York), the Museum of Contemporary Art (Miami), the Perez Art Museum (Miami), the Fondation Louis Vuitton pour la creation (Paris), the Collection Agnès b (Paris), and Bandjoun Station (Bandjoun). A recent commission was placed with the artist for four over-doors at the Rodin Museum (Paris).

Osei Bonsu is a British-Ghanaian curator and writer based in London and Paris. He is currently a curator od International Art at Tate Modern, where he is responsible for organising exhibitions, developing the museum’s collection and broadening the representation of artistes from Africa and African diaspora. As a leading curator of contemporary art, he has advised museums, art fairs and private collections internationally and mentored emerging artists through his digital platform, Creative Africa Network. Bonsu has worked as a contributing editor for Frieze magazine and has contributed to a number of exhibition catalogues and arts publications including ArtReview, Numero Art and Vogue.
Through his writing, Bonsu focuses on the relationship between art and issues of migration, race and identity in contemporary society. He has lectured widely on these subjects at various institutions including the University of Cambridge, Courtauld Institute of Art, and Royal College of Art among others. Bonsu holds a Masters in History of Art from University College London, and a BA in Curatorial Studies from Central Saint Martins. He 2020 he was named as one of Apollo Magazine’s “40 under 40” leading African voices.