The exhibition Fluid Desires at art institute Nest in the Hague, the Netherlands, ended on March 22. Of the eight participating artists, five were French. That’s no coincidence. As a Dutch liaison in Paris, I like to create connections between France and the Netherlands. Two countries that are geographically practically neighbors but at the same time, culturally and linguistically, worlds apart. They seem to be each others blind spot whereas the exchange can be, and has proven, to be so fruitful.

I started the research for Fluid Desires in 2013 when I was still living in the Netherlands and continued it in France. At the time it struck me that many artists used liquids. This intrigued me and I was wondering what motivated them. While researching I discovered a wider and more interesting field of art that deals with fluidity without necessarily using liquids, among them some of my favourite French artists: Hicham Berrada, Mimosa Echard, Marie Maillard, Shanta Rao and Jérôme Robbe (apart from Inge van Genuchten, Maya Rochat and Leonid Tsvetkov). I had been following their work for years. None of them had explored Dutch territory before. Now that the exhibition has just happened, visitors were glad to discover them and shared my enthusiasm.

Fluid Desires was an exhibition about the current liquid world. Concepts that have been carved in stone for decades are shifting. Think for example of time, space, reality, nature, object and the object-human relationship. Developments in science, technology and philosophy are the catalyst for these changes. An important place occupies the Polish-British sociologist and philosopher Zygmunt Bauman who has extensively analysed the increasingly slippery society. The hybrid, unstable world serves as a point of departure for the artists in Fluid Desires. Post-apocalyptic cocktails and other works of art with a liquid allure zoom in on blurring boundaries between natural and synthetic, living and non-living. Their understanding of the world is through matter. The artworks do not use symbols or metaphors, nor do they depict anything; on the contrary, they just are. These explosions of color, texture, and slipperiness, are related in aesthetics. Throughout the exhibition, the concept of contagion is recurrent. Contamination as a marker for meanings that mix, images that merge and ideas that influence each other. The exhibition has sometimes science-fiction-like traits as platitudes are deserted and the future is fantasized.

A striking statement by Jérôme Robbe is: “Painting has nothing to do with genius, but everything with inventions. The genius lies in inventing materials and techniques that make it possible to paint differently and better.” The artist therefore regards the history of painting as a succession of technical inventions. In order to proceed the development of painting and to be a painter of your time, it is necessary to continue the sequence of inventions. The L’Air de Rien series, started around 2009-2010, for example, is painted on plexiglass with a silver or gold coating which effects the depth, brightness and temperature of the applied color. The series responds to the aesthetics of body work of cars, gems and jewellery, but also digital devices.

Furthermore, in this and other series Jérôme Robbe drives the liquid aspect of painting to the forefront and makes it the essence of the work. He lets the paint flow freely and creates an image that contains an immense temporality. The paintings from the series L’Air de Rien and Surfaces are evocations of a fluid world. It seems as if paint and support have briefly solidified before the paint continues to drip, curve and flow. For Robbe, fluidity represents freedom. He doesn’t want to control the creative process but prefers letting things run their course and to leave things to drift. Not one sketch precedes these paintings. It arises in the here and now by anticipating what happens with the material.

The paintings in the L’Air de Rien series are the result of an elaborate process in which fluidity plays an important role. The initial step is warming the plexiglass with a heat gun. This results in it becoming soft; expanding; forming bubbles and ripples; and, craquelure appearing on the surface. Subsequently the artist vaporizes several liters of water above the plexiglass sheet that is lying flat. The mist slowly whirls down on the panel. Transparent varnish, colored with pigments, is then poured on and allowed to find a way across the distorted surface, just as a river follows its bed or as a lava flow searches its lowest point. Gravity and chance do their job. Depending on the result, certain parts are sanded lighter (for example, where too much varnish accumulates) and once again poured with matte or glossy varnish. Because of the consistent application of a lateral line onto the canvas, the abstract monochromes can also be recognized as landscapes. Where the artist previously depicted landscapes, he nowadays lets them emerge.

When I visited Jérôme Robbe’s studio a few times in 2019, it was still based at a stone’s throw of Paris, in the northern banlieue Asnières-sur-Seine. The former printing house was shared with many other artists including Mohammed Bourouissa. His studio, consisting of a working area and a ‘showroom’, was bustling with activity. Paintings from four series, if I counted correctly, were at different stages of completion. Two paintings from the Surfaces series were drying in the varnish booth. A great, intoxicating fragrance oozed towards me. The cardboard on the floor soaked up the excess paint. It gave the artist the idea for yet another series of paintings: Diary (Beyond the subject lies time) tells the history of the studio.

The Surfaces and L’Air the Rien series have many similarities. A thin sheet of plexiglass functions as the support and instead of depicting a landscape it is created by pouring the material on the surface. It reminds the artist of Californian skies. However, in the Surfaces series the plexiglass sheet is glued to an aluminum frame. As the bars of this frame have a visual effect on the front, the artists plays with the amount and positioning of these bars. For example, a black painting has a classic cross shape on the back and a blue painting is divided into six sections. Layers of the cast varnish are removed by sanding and this creates bright spots or areas. In fact, the whole point of these abstract paintings seems to be to create a surface on which light has free rein. Often another layer of varnish is poured on it, again followed by sanding. A process that is repeated several times. The method seems to be very controlled, however it is rather a secession of accidents and material constraints. The Light and Paint series seems to be a sequel to this. Neutral colored canvas is inlaid with one or two rectangular color panels. These often huge but light paintings clearly pay homage to Mark Rothko. 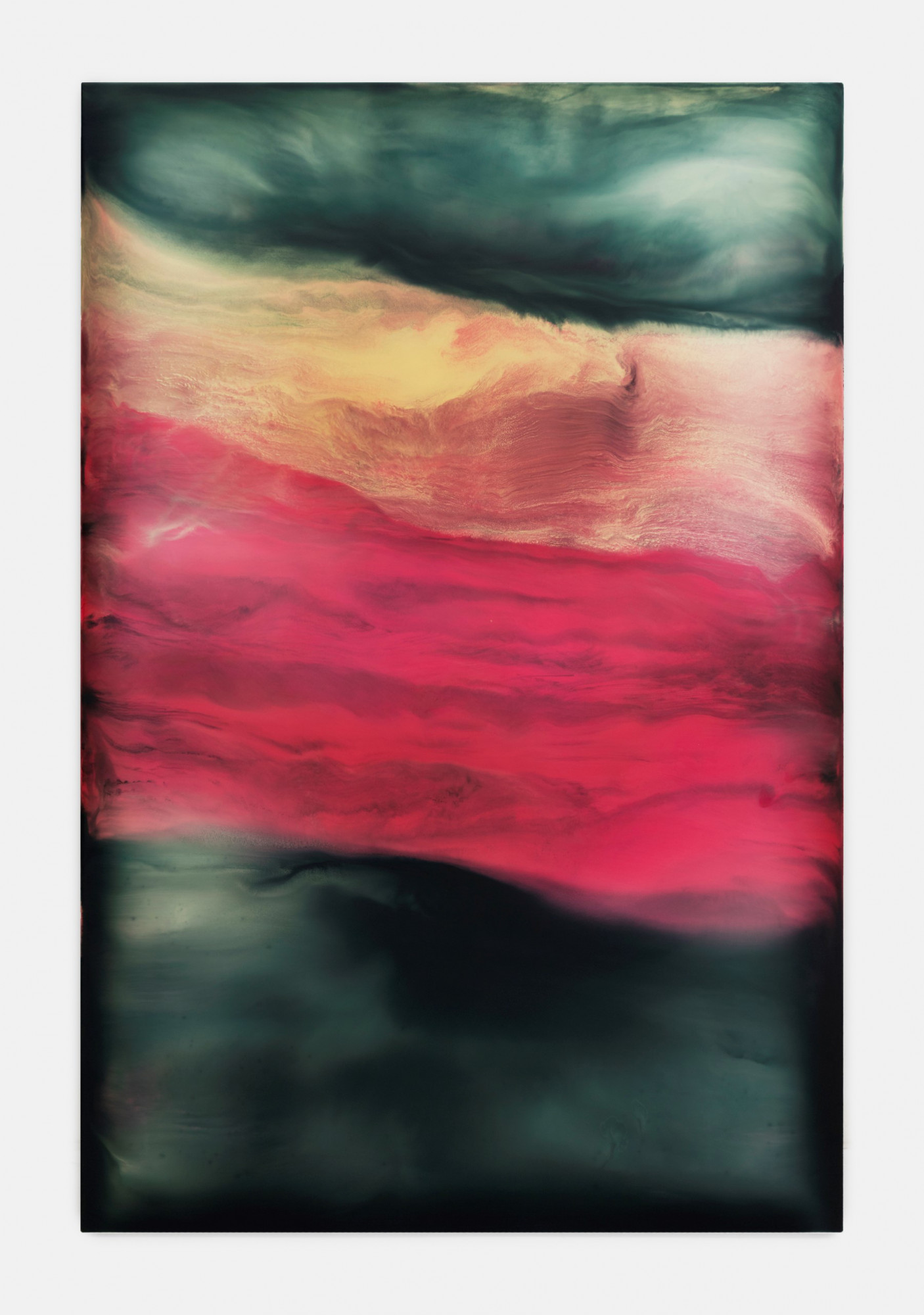 Born in Paris in 1981, Jérôme Robbe lives and works between Paris and the west coast of France. A 2008 graduate of the Villa Arson in Nice, Jérôme Robbe regularly exhibits in French and international galleries. His work is also presented and collected by art centers such as the Mac/Val in Vitry-sur-Seine or the Nest art center in La Hague, Netherlands. He collaborates internationally with various exhibition curators allowing the circulation of his works from Sydney to London, through Los Angeles and New York. A canvas to immerse oneself in as in a landscape, to survey, to watch in its infinite changes. A painting of possibilities. This is how Jérôme Robbe’s practice could be defined; to reinvent his medium. Heir to American Abstraction and its vast all-over horizons, but also to German Romanticism and its sense of the sublime, he always juggles with the painting as with a landscape in itself; “I began by painting skies, and little by little I freed myself from this origin, to go towards the sensation, the feeling”. Fascinated by the constant invention of the Renaissance, he continually imagines new tools. Everything in his work participates in this enterprise of deconstructing painting to build surfaces. Jérôme Robbe has worked a lot with mirror surfaces. What he seeks in each painting is a meaningful and reconciling image. Because the question that the painting of Jerome Robbe poses, beyond a henceforth classic questioning of the means of the painting, is rather that of the place of the observer. Where do we stand when we look at a painting?

Being an art historian, Nanda Janssen works as an independent curator and art critic. She is also Councellor of visual arts for the Embassy of the Netherlands in France since 2018. She considers herself as a Dutch liaison in Paris. Since 2007 she has specialized in the Paris and French contemporary art circuit. After two residencies of a year at La Cité Internationale des Arts, the last of which ended in 2017, she decided to stay in Paris. She publishes amongst others in the Dutch art magazines Museumtijdschrift, Metropolis M, See All This and the Belgian magazine Hart. Nanda Janssen curated the exhibitions Fluid Desires (Nest, The Hague, 2020), Eva Nielsen (Selma Feriani Gallery, Tunis, 2017), Bruno Peinado (21rozendaal, Enschede) and Carried-Away - Procession in Art (Museum Arnhem). Furthermore, she proposed the Ceija Stojka exhibition from La Maison Rouge in Paris to the Dutch museum Het Valkhof and subsequently assisted the French curators (2019). In addition, she will be on the committee ‘mécénat’ of La Fondation des Artistes (2022-2023). She was one of the jury members of the Royal Award for Dutch Painting (2014-2019), initiated by HM King Willem-Alexander, and committee member visual arts of the Dutch Council for Culture (2015-2017), the legal adviser of the government in the fields of the arts, culture and media.