Corentin Canesson is a painter who rarely works in isolation, in his studio. Rather, collaboration is key to his process, and his commitment to collectively produced work is fueled by a genuine interest in the generative exchanges that occur in these contexts. Over the last decade, he has built an expansive practice that has flourished through myriad projects, residencies, and exhibitions that benefit from the conversations and participatory works made with artists from his community in Bretagne and in Paris, and with our shared endeavor at the Visual Arts Center this spring, in Austin, Texas.

Over the last five years, Canesson has presented his work and that of his frequent collaborators in traditional gallery contexts such as Le Crédac in d’Ivry and the Fondation Pernod Ricard amongst others as well as nontraditional sites, including the Jeanne Hachette shopping mall in the d’Ivry neighborhood in Paris. There, in the spring of 2021, Canesson and Damien Le Dévédec (an ongoing collaborator) participated in a residency and durational exhibition organized by Le Crédac and curated by Maëla Bescond called Art, Fleur, et Nature/You Can Have it All. Through this residency program facilitated by Le Crédac, artists were given access to temporarily vacant storefronts and other spaces throughout the community for a defined period of time. Canesson was given the space of a former floral shop in the shopping mall, and over the course of four months, he and Le Dévédec produced over one hundred paintings, filling the walls and floors, and utilizing the empty risers and pedestals previously employed as supports for floral displays as plinths to show their painted canvases. Canesson’s typical text-based paintings populated by layers of colorful brushwork and phrases culled from obscure and popular music and poetry were interspersed with those containing erotic subject matter, nudes, still-lifes, landscapes, and portraits of other collaborators, friends, and colleagues (such as Etienne Bernard, director of the Frac Bretagne). This panoply of works, spanning genres and styles, demonstrated both the versatility and flexibility of Canesson’s practice while mirroring the abundance and variety of florals one would generally find in a floral boutique. In this case, peonies, tulips, and roses were replaced by brightly colored canvases in a range of styles and sizes. The “goods” that would customarily be for sale in a flower shop were replaced by another set of “goods.” However, at the close of the exhibition, Le Dévédec and Canesson organized a giveaway, a free for all, subverting the commodification of these “goods.” All of the paintings produced during the residency were given to whomever attended the closing festivities. Thereby, Art, Fleur, et Nature/You can Have it All lived up to its name — you could have it all.

In Sleep Spaces / Les Espaces du Sommeil at the Visual Arts Center (spring 2022), Canesson incorporated posters from Art, Fleur, et Nature/You Can Have it All alongside those made for other exhibitions and performances by his experimental band, TNHCH, as a form of citation and to demonstrate continuity with previous projects. Canesson almost always includes several works from his own oeuvre alongside personal possessions and the works of other artists he admires in his exhibitions, and this has become a signature feature of his practice as both an artist and curator. In Sleep Spaces this extended from the gallery walls to the archival cases that held a selection of Canesson’s personal effects — a childhood diary, drawings by his daughter, postcards, Shirley Jaffe’s paintbrush, a straw hat from Texas, and found objects as well — alongside works by other artists. These compositions shed light on Canesson’s practice and his process while challenging art historical hierarchies between the high and the low, fine art and the mass-produced object. The cases were juxtaposed with posters and paintings on paper as well as large-scale paintings on canvas made on site during Canesson’s month-long residency in Austin with the works of 36 other artists from Texas and throughout Europe. An ambient soundtrack of TNHCH B-sides and music videos made by other artists bookended the exhibition, providing an apt introduction and conclusion to the show.

Written by the surrealist poet Robert Desnos between 1919 and 1929, Les Espaces du Sommeil (Sleep Spaces), with its ringing refrain, “there you are, there you are,” describes a dreamy meander through the darkened streets of Paris. The poem’s wanderer comes upon different sites and sounds, and this multisensorial patchwork represents what the city is — an alluring space rife with possibilities because of its vast plurality, because of its multitudes. Taking this as a point of departure, Canesson’s Sleep Spaces presented a multilayered ramble through artistic perspectives, styles, and techniques, and this variety made for an exhibition that foregrounded experimentation and play. Working in this way also allowed Canesson to problematize certain standards and conventions that govern curatorial practice, favoring openness and flexibility over a prescribed plan. Favoring impromptu and improvisational groupings, configurations of works made by contemporary artists appeared alongside those that privileged transhistorical dialogues. For example, prints by Joan Mitchell and Willem de Kooning were juxtaposed with posters and paintings by Canesson and Alisson Schmitt and Samir Mougas; paintings by Amy Sillman shared space on the wall with a print by John James Audubon; and a print by Ed Ruscha was grouped with a print by Hilary Galbreaith, a photograph by Emily Peacock, and paintings by Canesson. Together, these works and the others on view in Sleep Spaces advocated for the importance of variety, variation, and the versatility expressed by Desnos in the early 20th century. Almost one hundred years after Les Espaces du Sommeil was first published, the poem still inspires, and in the case of Canesson’s Sleep Spaces, Desnos’ words became the basis for an expansive approach to curation. 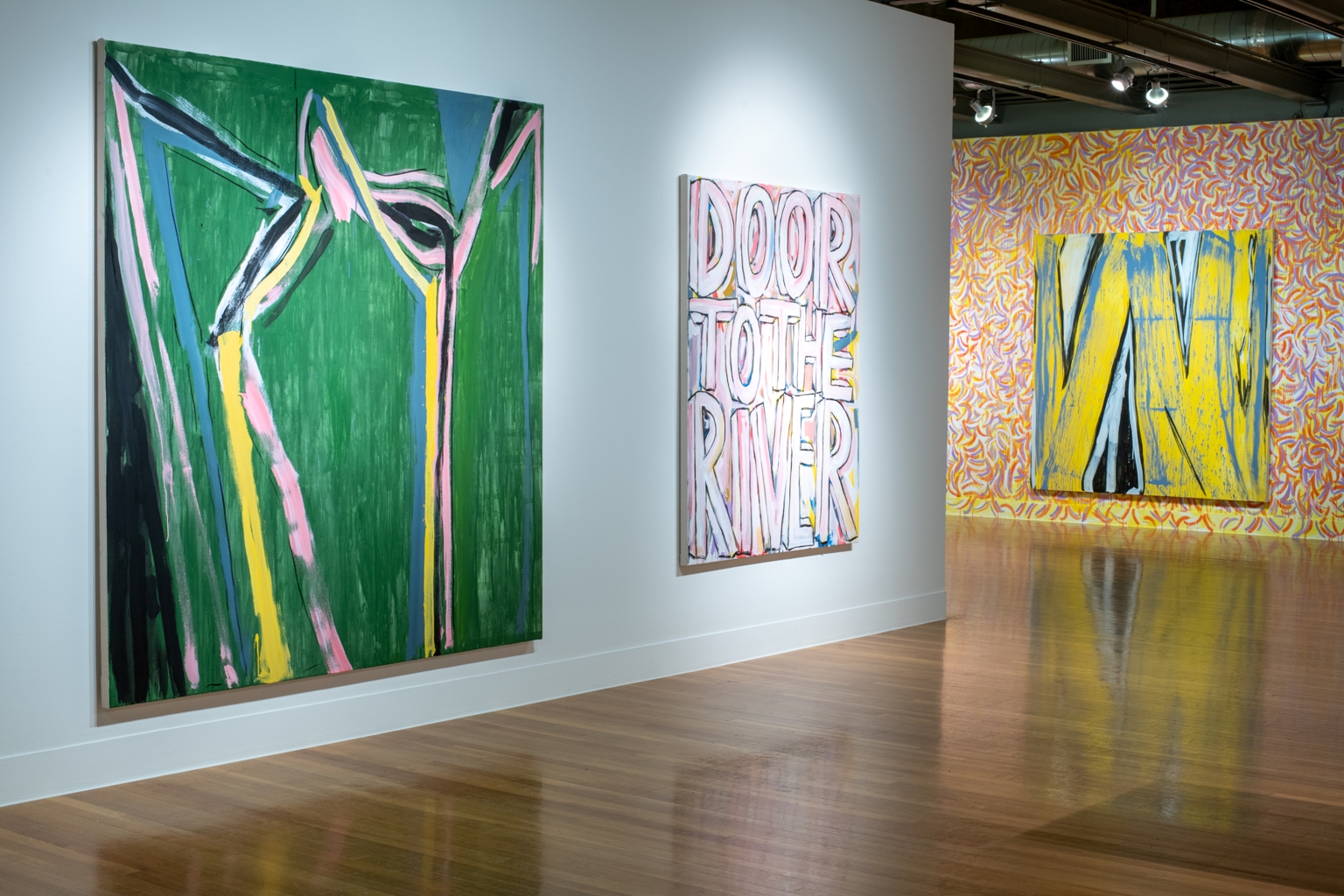 Corentin Canesson is born in 1988 in Brest, (France). He studied with Jean-François Maurige at École Européenne Supérieure d’Art de Bretagne in Rennes where he got a DNSEP (2011) and attended the art school at Hochschule für Grafik und Buchkunst in Leipzig (2010). Recently, he has had solo exhibitions at the Gallery Sator (2020), Romainville, which represents him, at Gallery Nathalie Obadia (2018), Paris, at Centre d’art Contemporain le Crédac, Ivry-sur-Seine (2017); Centre d’art Contemporain Passerelle, Brest (2015); amongst others. His work has also been in group exhibitions at Musée Zadkine, Paris (2021); FRAC Bretagne, Rennes (2021); Art au Centre, Liége (2020); Frac Champagne-Ardenne, Reims (2019); Les Abattoirs de Toulouse (2017); Jean Brolly Gallery, Paris, (2020, 2016). Corentin Canesson won the Frac Bretagne Prize (2021) and he participated to the Ricard Prize (2019). He co-directed the exhibition space Standards in Rennes from 2008 to 2014 and is a resident at DOC! in Paris. He is also the guitarist of the experimental band TNHCH.
He will soon present his work at the Visual Arts Center in Austin (Texas, US) for the exhibition “Sleep Spaces / Les espaces du sommeil” (curated by Mackenzie Stevens) as well as at the Villa Arson in Nice for the exhibition ” Things We lost in The Fire ” organized by the artist Lola Gonzalez.

MacKenzie Stevens is the Director of the Visual Arts Center at The University of Texas at Austin. Stevens received her BA in art history from the University of California, Berkeley and her MA in art history from the Courtauld Institute of Art in London. At the Visual Arts Center, Stevens has organized exhibitions with Carmen Argote, Corentin Canesson, Joey Fauerso, Nikita Gale, Juan Pablo González, Madeline Hollander, Michael Queenland, Luiz Roque, and Kenneth Tam amongst others as well as a mid-career survey of Houston-based artist, Lisa Lapinski. Currently, Stevens is working on an exhibition with Kate Newby, a book project with Lisa Lapinski, and is co-curating a group exhibition titled Social Fabric: Art and Activism in Contemporary Brazil, focusing on Brazilian contemporary art with Adele Nelson that is slated to open at the Visual Arts Center in September 2022. Social Fabric received The Andy Warhol Foundation for the Visual Arts Grant.
Prior to joining the Visual Arts Center, Stevens was part of the curatorial team at the Hammer Museum in Los Angeles. There, she organized exhibitions, performances and public programs, contributing to a number of exhibitions with artists such as Marwa Arsanios, Kevin Beasley, Petrit Halilaj, Maria Hassabi, Judith Hopf, Molly Lowe, and Pedro Reyes, amongst others. She was part of the curatorial team for Made in L.A. 2016: a, the, though, only and Made in L.A. 2018 — the Hammer’s biannual museum-wide exhibition that celebrates the work of artists living and working in the greater Los Angeles area. Stevens contributed to the exhibition catalogues for Jimmie Durham: At the Center of the World and Made in L.A. 2018.
Prior to her tenure at the Hammer, Stevens held curatorial and research positions in Los Angeles and New York City at The Museum of Contemporary Art, Los Angeles, The Museum of Modern Art, New York, and Pace Gallery, New York.