Kho is the central character of Walid Bouchouchi’s series drawings documenting the life of a young Algérois whose world is defined by the rhythm and imaginative universe of the Algerian capital. The best translation of the word «Kho» as Bouchouchi uses it is “bro.” It is a soft word used to acknowledge that every man belongs to someone, to some version of family. As a mode of address, the term also confirms masculinity—Bouchouchi’s Kho could not be a woman.

“Kho is sound, he is a verb, he is profoundly chauvinist and subtly international,” Bouchouchi writes. Kho is born of Bouchouchi’s own observations, but he nevertheless perpetually escapes the limits of an individual experience. Bouchouchi’s corpus of drawings transcribes the slow choreography of Algérois street-life: its semiotic contradictions born of cosmopolitan cultural appropriation, its existence between grapheme and sonic echo.

In one drawing, three cigarette hawkers stand in a line and open their coats to reveal row upon row of Marlboro packs. The careful viewer will notice the reference to Baya’s paintings of houses lining the hills from the mid-20th century. In another drawing, this viewer will see a bird sketched in homage to her perched on the edge of the composition, as though benevolently overseeing the semiotic cacophony of Algérois life. Bouchouchi also borrows Baya’s attention to the shape of the eyes for his figure, along with the implicit suggestion in her work that the act of perception takes up most of a person’s face.

The strength of Bouchouchi’s work lies in his ability to seamlessly layer fine art and street art references, such as sports insignia and popular religious iconography. Kho is the policeman, the street musician, the contemporary Algerian flaneûr all at once. He represents an oral culture composed of “slogans, dictums, and punchlines,” Bouchouchi explains, which are scrawled across the drawings in overlapping lines in Arabic an Imazighen alphabets as well as Latin script. Wordplay and symbolic play converge in the Kho drawings, which stand as a testament to the imaginative virtuosity of a city that remains imperceptible to many beyond its borders. 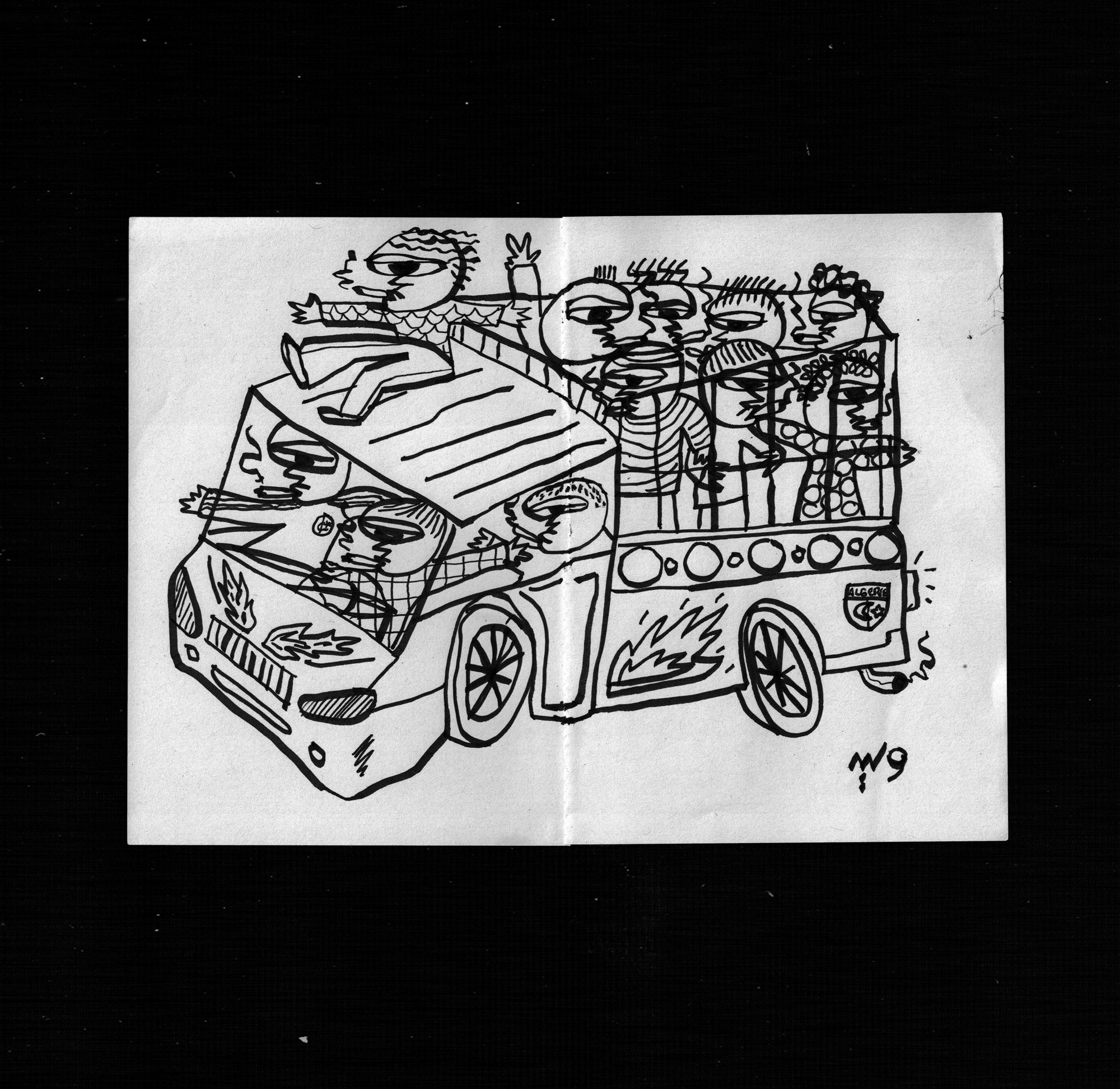 Born in Algiers, where he later graduated from the School of Fine Arts, Walid currently lives in Marseille, and works between Paris, Marseille and Algiers. His recent work is mainly pictorial and gives a glimpse of urban popular culture in the streets of Algiers through which “kho”, his main character, slips.

Walid has participated in various exhibitions, including the 2014 Dak’art Dakar biennial off, the Museum of african design MOAD in Johannesburg in 2015, DUBAI design week in 2016 and 2017. He has also been included in the following publications: Houcine Zaourar in 2014, Algeria unveiled from shadow to light, Algeria: The nahda of letters, the rebirth of words in 2015 and Sex, race & colonies in 2018.