Before I met Rebecca Digne in person, I was pulled in by her works due to an unassuming, discreet quality I cherished in them. Her films and installations seemed to operate through subtle gestures and atmospheric shifts while remaining grounded in our experience of reality outside of the artistic frame. It seemed like she was finding and staging the extraordinary hidden in the details of a situation or a setting inscribed in continuity with lived experience itself. Repetitive movements and gestures ordinarily unfolding over set periods of time, like the matter-of-fact presence of an elephant slowly wandering through the gardens of the historic palazzo Villa Medici in “Metodo dei loci - chapitre I” (2019), as if this was a daily occurrence in the life of any elephant. This matter-of-fact framing of the event carries a subtle revelation of something not about the elephant, but about the surrounding architecture, its scales and around what it operates within the landscape. It is not an elephant freely roaming in an urban context that is shocking, but the palazzo’s construction itself, the measures and the landscaping of its gardens which become strange and alienating, standing out as the silent source of tension and suspense. This displacement is made possible by Rebecca Digne’s careful weaving of multiple threads between documentary and fiction: still frames and long shots make the camera and the artifice of montage almost disappear while the artifice of landscape architecture stands out against the bodily presence and slow movements of the pachyderm, this oversized living symbol of memory.

This initial encounter with one short film activated two fundamental questions that have informed my thinking for a while: what is the status of process set against a finished work of art? Where and what is the difference between a document and a work of art?

Rebecca Digne begins to talk about her process as situated in the “field”, outside of the studio. Akin to a dramatist and anthropologist combined, she reads, surveys and observes landscapes, relationships and situations like texts out of which she then selects elements, tensions and movements to stage and enact in collective actions, films and exhibition settings. She is interested in “the primary and the primitive”: the fundamental, bare and unapologetically utopian human experience of making: creating something together, relating to one another and to the matter of the Earth that surrounds us: soil, wood, rock, architecture, language.

In 2017, in response to the landscape of the Vassiviere island, she facilitates and films the construction of a raft out of dead wood by two craftsmen, without the use of electricity. Set in the woods of the island surrounding the International Centre for Art and Landscape, “L’Aventure”, the resulting film, documents this slow process of making tuned down to the scale of human hands, , and pierces through the exhibition setting as an eruption of process over the assumed autonomy of form. The resulting exhibition “A La hauteur de la terre” (2018) is imbued with an imaginary of movements between subterranean and surface realms that underline the precariousness of all architecture in time. A thick rope stretches and meanders through the space, an index of movement in height and distance, coils around two columns and shoots outside from the narrowest window, across the field surrounding the building, reaches the actual raft on the lake, whose “making of” is offered for contemplation in “L’Aventure”. With this gesture, an uncertainty hits the horizon of anticipation: is the raft pulling the building into a movement across the lake, or is it the exhibition that stabilizes the raft floating on the water? This loosening of signs from the stable moorings of their referents is Rebecca Digne’s invitation for emerging fictional potentials. She says: “A film tells a story, but an exhibition gives the possibilities for a narrative to emerge”.

The rope’s anchoring of the exhibition and the raft is echoed in the film as the two craftsmen extend a smaller cord on the ground to calculate the measurements of the raft to be built, standing on two edges of the line that connects them. The gesture of stretching, rolling out, pulling in and extending a rope to connect different points in time and space, to measure and scale, to relate things that seem distant or distinct in nature, to move bodies and thoughts along knots and threads, to project and recollect, operates both as a framing device and a narrative method across Rebecca Digne’s oeuvre.

An older performance-film, “Tracer le vide” (2017) stands out as a focal point gathering multiple threads that run through her works and materially connects with “A la hauteur de la terre” through the use of the exact same 600 meter rope. A collective performance carried out across the sea shores of Naples and Marseille and filmed in 8 and 16 mm features a group of friends. They take turns holding, stretching and coiling the cord around rocks, connecting their bodies to elements of the landscape as they move, grasp and release each other and the landscape by manipulating the rope. This is a pacing of the physical field between where Rebecca was born (Marseille) and where she grew up (Naples), moving between the sea and the land, between bodies and the emotional territories of language and meaning. This is a pacing of the playing field to create something together, to create and become a temporary community. The rope is a recording device, it documents and enables every move, it turns and coils, it stands for multiple moving relations, the rope is a montage, the rope stands for film, for the territories of thought.

I keep thinking about the raising of a tent, the tightening of ropes held between human hands, the woven texture of a tent wall or a sail against the wind, the anchoring into the ground of a circus tent as a narrative space where people assemble and disperse, a space that is open to experiences and that stores experience. Rebecca tells me of her youth spent working at a circus. She says: “Life brings me questions and work allows me to enact and experience them”. 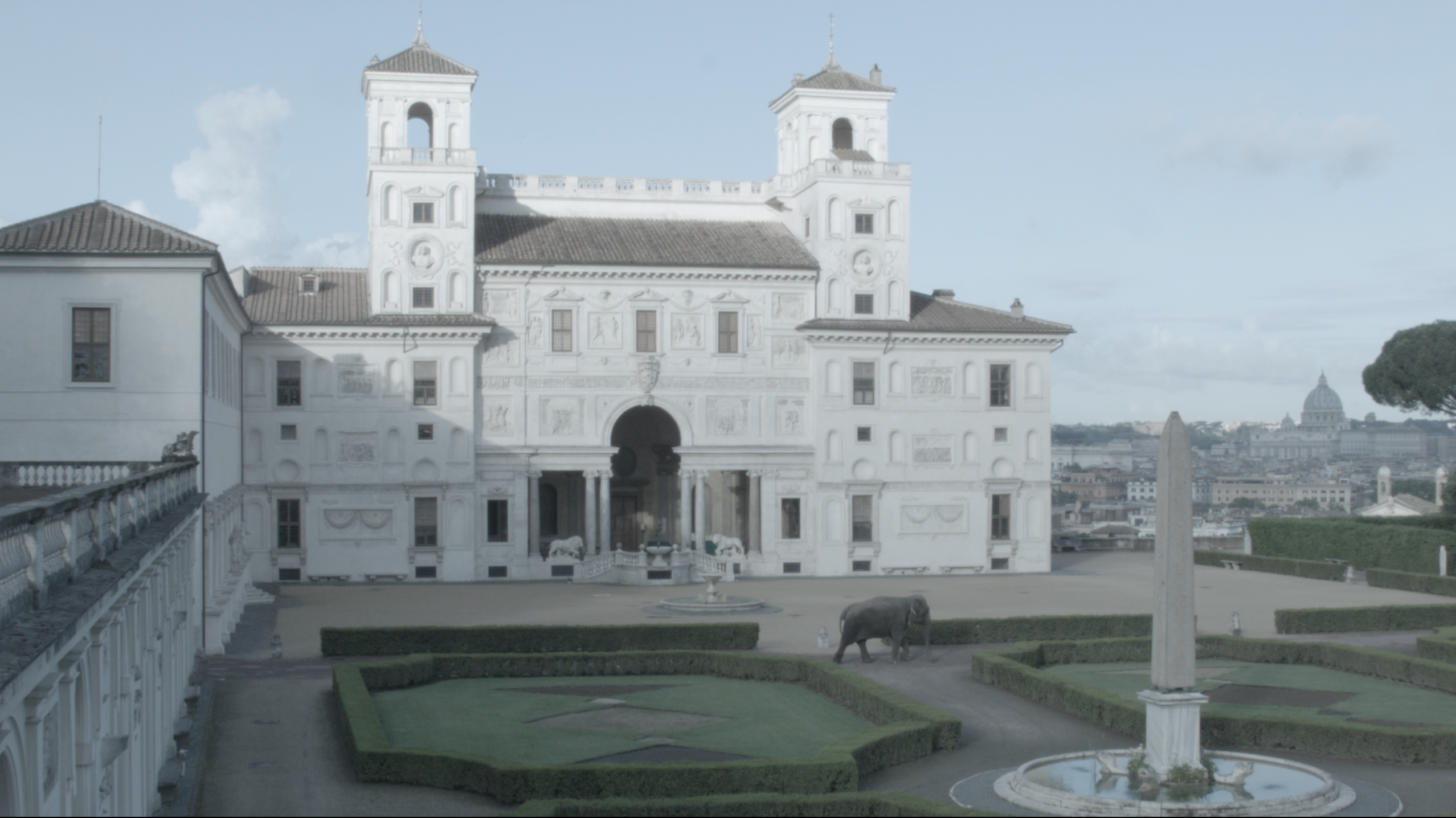 Rebecca Digne was born in 1982 in Marseille, currently lives and works in Paris.

She graduated from the École Nationale Supérieure des Beaux-Arts de Paris with jury honors in 2009. During two years (2010-2011) she is a resident at the Rijksakademie Van Beelden Kusten in Amsterdam then follow the residency programm of the Palais de Tokyo: Le Pavillon, in Paris (2013-2014) and Villa Medici in Rome, Italy (2018-2019).

Rebecca Digne’s pieces are enigmatic evocations that capture the projection and the exhibition space as a « place of resistance to the time. » The image, both subject and medium, is operated as a territory where intermingle with issues related to the matter of waiting, time, identity, gesture or ritual.

Asli Seven is an independent researcher, curator and writer based between Istanbul and Paris. Her research and curatorial projects focus on infrastructure, landscape, pedagogy and performativity of documents, with an emphasis on fieldwork, ficto-criticism and co-creation.

In 2020-21 she was the recipient of CNAP and Cité des Arts grant and residency for curators in Paris. Since 2014 she has collaborated as curator and writer with Arter, SALT, IKSV, Protocinema, The Pill, Bilsart and others in Istanbul; and CNAC Magasin, Grenoble, thankyouforcoming, Nice and Galerie La Box, Bourges, in France. Since 2018 she has lead workshops and taught as guest lecturer at Sotheby’s Institute of Art, London, MOCO Esba Montpellier, Arter Research Program, Istanbul and ENSA Bourges. She holds a doctoral level degree on Artistic Research delivered by ENSA Bourges and EESI Poitiers-Angouleme (2019) and a Research MA in Political Science from Université Paris 1 – Sorbonne. She is a member of AICA, C-E-A (French Association for Curators) and a collaborator with Independent Curators International (ICI).