Gender difference structures human thought since it controls the two fundamental concepts of its articulation: the identical and the different.

The way in which each culture constructs this difference sets in motion its entire conception of the world, its sociology, its biology as well as its cosmology.

The differential valence of genders long considered to be at the foundation of society seems to be set in motion now more than ever, and the first vectors of this intellectual overthrow are – again – artists.

Nowadays in France and other geographies, we are witnessing a paradigmatic shift that is upsetting intellectual mechanisms developed over centuries of social constructions. The relationship to the body, to nudity and the questions surrounding its representation have probably never been such a major issue in the history of forms.

I chose to present the work of four French artists who either initiated or accompany this change of paradigm.

Fluid. It’s the story of the conquering heroines of Apolonia Sokol, her amazons, woman, man, neither woman, nor man.

Fluid. It’s the story of the male body stamped with pink cheeks of Soufiane Ababri who overthrows its representation as a tool of domination by deconstructing it.

Fluid. It’s the story of the genesical creatures of Elsa Sahal, at the edge of abstraction, yet still figurative.

Fluid. It’s the story of Pierre Molinier’s surrealist language as a tool of represention for an eroticized fetishism.

Soufiane is laying in bed, he is drawing. Glazing at the opened window, he is contemplating the tankers finding their path to Istanbul. From one detroit to another. Soon enough, he will be there himself. He is going to show his bedworks for the first time in Constantinople. Soufiane remembers the times when men used to walk hand in hand in the streets of the kingdom, not so long ago. The relationship to virility was not carrying any ambuiguity thanks to the radicality of its application. Exactly like in his solo exhibition Memories of a Solitary Cruise where he leads a sociological autopsy of the concept of Orientalism articulated as such by Edward Said. Jean Genet is close by. He is the subliminal subtitle of an œuvre obsessed by the representation of the male body in its utmost truth, so uncompromised that it becomes almost always paroxystic.
The collapse of it, materialized in the pink cheeks all the bodies Soufiane Ababri draws wear.

In Soufiane Ababri’s drawings, men breastfeed man, these post-modern caritas romanas are as fluid as the water on which the tankers drift, as fluid as the oil that covers the wrestlers’ bodies.

Soufiane drew my portrait. I am not a woman. Neither am I a man. I have no breast. One can tell from the shape of my entre-jambe that I am carrying a penis. My identity has no gender, my gender no name. Differenciation is no longer valid. My name is fluid. 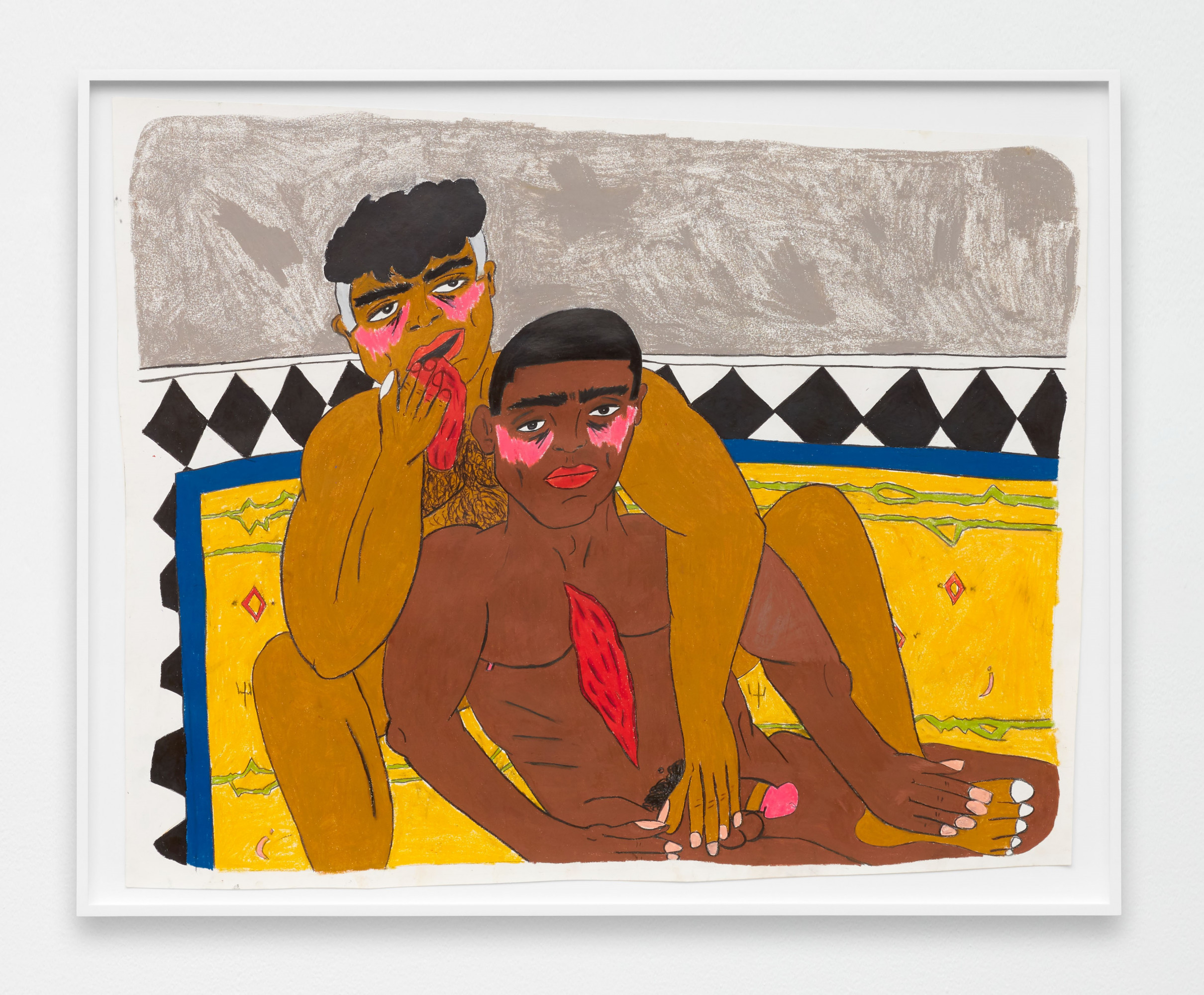 It is in his bed, lying down, that Soufiane Ababri makes his bed works. Ababri’s goal is to produce a militant discourse and this leads to a performative approach inspired by certain forms of resistance seen in the Afro-American and gay movements, a form of empowerment thanks to which these movements’ members took what was considered as a failing and turned it to their advantage. A political message therefore, but not one that relies on the authoritarian vocabulary of the dominant caste. Its sole weapons are coloured pencils, the prone position and drawings that address various personal themes in a sort of intersectionality combining race, class, immigration, gender, sexuality, the body and post-colonial history.

In essence, Soufiane Ababri examines the ambivalence of a society that is criss-crossed by tensions that are not so much the reflection of its contradictions, but rather of its complementarity. His heritage lies in his own story, built up by layer upon layer of personal and intimate events. A lover of sociology, Ababri’s entire body of work plays with the idea of seeing: the artist observes a world that observes him in a form of introspection combining his own unique perception, shared representations and accepted social facts in an exercise that is reminiscent of Persian miniatures and their subtle play with what is hidden and what is revealed.

After studiying philosophy, Suela Cennet specializes in political sciences and public policy making at Sciences Po Paris where she completes a double masters degree in International Relations as well as an MPA. Multilingual and very active internationally at a young age, she is appointed co-curator on the occasion of Istanbul, cultural Capital of the EU in 2010. Shortly after, she took the lead of operations at Galerie Templon where she contributed to the debute of artists such as Juliao Sarmento, Kehinde Wiley, Jitish Kallat.

In 2013, she decides to move her operations to Istanbul and creates a gallery with her own rooster of artists among which a strong family of French artists such as Marion Verboom and Eva Nielsen. Located in an ancient generator factory, The Pill® is an international contemporary art gallery based in the historical peninsula of Istanbul by the Golden Horn. Founded in 2015 and launched in January 2016, the gallery operates as a global platform that brings together local and international artists. Initially imagined as a mobile naval project space, It aims to create a fertile environment for multi-disciplinary contemporary art, to increase the emerging scene’s visibility and enable a relevant dialog within the local context by multiplying collaborations with other institutions in the region, and inviting international artists to think their practice or experiment in a new territory. Since its opening, the gallery has achieved to establish itself as one of the most influential players in the region by multiplying museum acquisitions, enabling its artists to participate in Biennales.

The gallery’s artists have been shortlisted for coveted art prizes and The Pill® is part of the 2017-2018 selection committee as well as the jury for Emerige Mecenat and their Emerige Prize for Emerging Contemporary Art as the international partner, a new feature in the prize’sorganisation.